Texas has the largest number of delegates up for grabs on Super Tuesday. Ted Cruz faces a must-win situation in his home state in order to continue pursuing the Republican nomination. In anticipation of the primary, we took a look at the top 100 search terms that were used for Trump, Rubio and Cruz along with their names. Excluding terms that only included a candidate’s name, we categorized each of the words into one of seven categories. 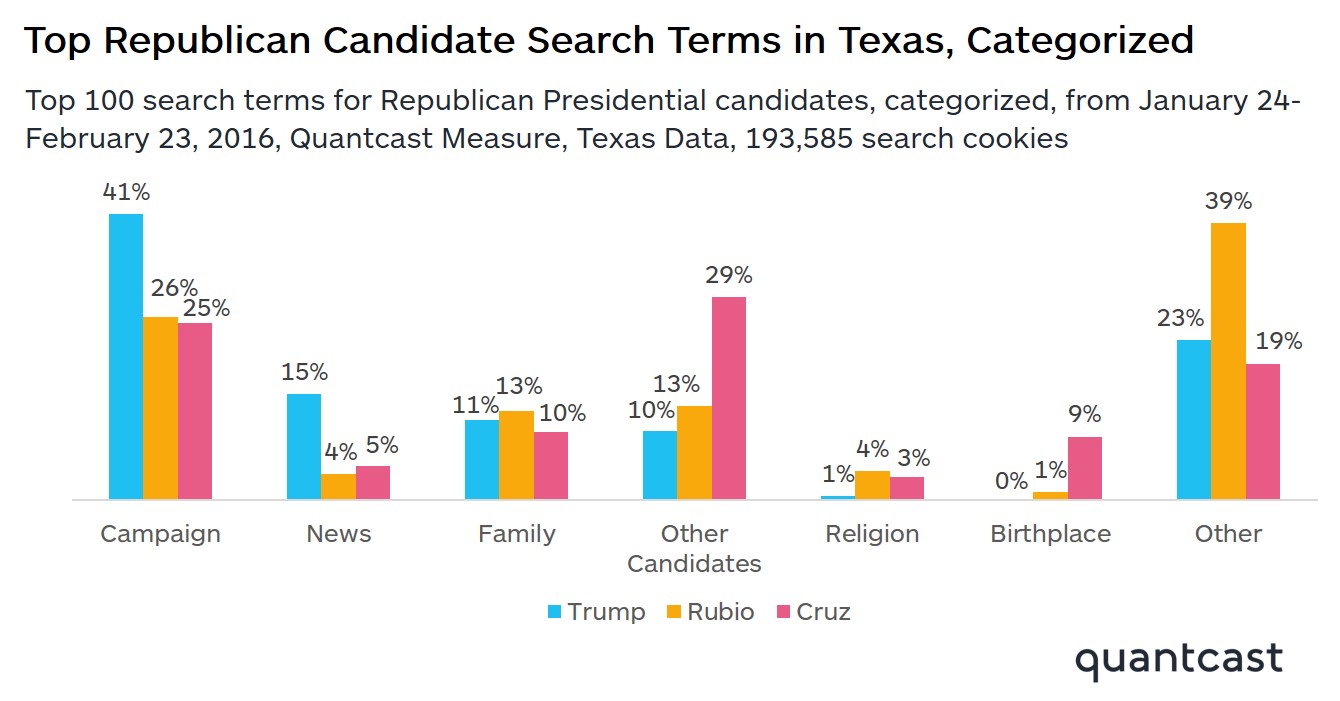 Trump’s highest proportion of search terms was campaign related. Perhaps it’s his runaway success in the most recent state primaries or interest in how he will make America great again, but nonetheless, he was the only candidate to have a majority of search terms fall into the campaign category. Doubt around his citizenship was non-existent – he was the only candidate to not have any search words related to his birthplace. Religion – usually another hot topic for candidates – also didn’t garner much interest in Texans’ searches.

Cruz’s most popular search terms included other candidates’ names. Searches were high regarding Cruz’s claim that Ben Carson was out of the race, along with Trump’s vulgar language toward Cruz. Interest around Cruz’s birthplace was the highest of the candidates – another area Trump has called into question.

Each of the candidates had strong interest in different areas – Trump with campaign-heavy words, Rubio with more personal matters and Cruz’s constant inclusion with other candidates. As Texas heads to the polls, the vote can go either way.

Quantcast has one of the world’s most-sophisticated data-intelligence platforms, using big data and machine learning to solve the biggest challenges in marketing. Quantcast Measure is used by leading publishers for free audience measurement, including demographic and lifestyle insights powered by Quantcast Audience Grid. Quantcast Advertise is a leading programmatic advertising solution for reaching and influencing targeted audiences. Learn more at www.quantcast.com.

The hoverboard, a self-balancing skateboard, was one of the top selling tech toys of the year and one of the most newsworthy.
To see which commercials were successful in the big game, we took a look at a few of the celebrity-endorsed products in the UK.
Is he dead or alive? Fans have been dying to know the fate of Game of Thrones character Jon Snow since the end of last season. We used data to find out...