About a week ago, before he went to bed, my ten-year-old son got a text message indicating his phone was compromised. For him, this was the stuff nightmares are made of, making it difficult for him to sleep. We later learned his phone hadn’t been hacked, but the fear in his eyes was unforgettable. When I asked him why he was so scared, he recounted a memory of his grandmother clicking on a clickbait recipe, resulting in her Facebook identity being stolen. My older stepdaughter chimed in with her personal anecdote: a virus ended up impacting a friend’s computer because she clicked on an ad. Thinking back to my last blog post regarding marketers who focus on measuring display with clicks, I felt validated: this is just a further reason why clicks are not the best metric for measuring display.

The rate of clicks is declining steadily, and part of that stems from consumers’ concern over fraud and phishing. At Quantcast, we are seeing a click-through rate (CTR) decline by 40% from Q3 2019 to Q2 2021. This is in line with the Google estimate of display clicks reducing by 41% from Q4 2019 to Q1 2020 and search clicks reducing by 38% in the same period. 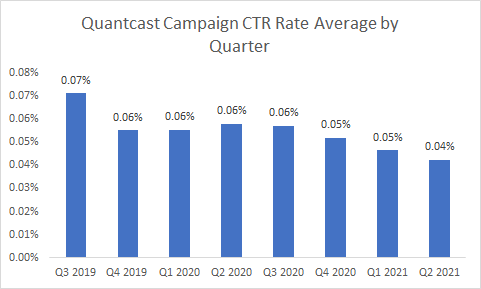 Although fewer people are clicking ads due to security concerns, this doesn’t make the ads irrelevant. In fact, consumers are still highly impacted by viewing an ad. Diving into campaign data across a sample of clients, Quantcast has seen an increase in view-through conversions of 821% from 2019 to 2021. This impact of ad viewership could increase even further if marketers focus on highlighting the value of seeing relevant ads rather than the annoyance of an irrelevant ad. 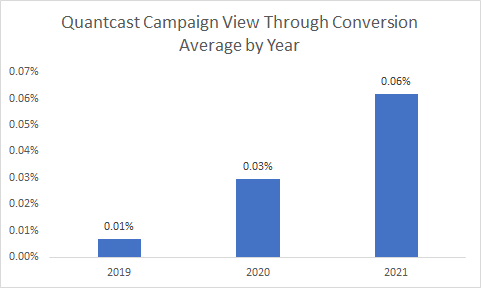 Taking a step back and thinking about digital advertising overall, the new generation is a lot more open to viewing online ads if the products and services are aligned with their interests. My son will tell you, “I hate ads,” but that doesn’t stop him from pausing an ad on his iPad about his favorite video game, running into his twin sister’s room, and making her watch it with him. When ad creative is relevant to him, he is happy to see it.

When personalization was introduced, it was negatively viewed and consumers likened it to Big Brother watching you. I remember a conversation at a former company, where we tried to determine when personalization would cross the line from being helpful to being creepy. At the time, we determined that it would be appropriate to observe a browser’s interaction with an item that was searched on a retailer website, serving them up branded ads, but that mentioning a client’s points on a rewards program went too far. Consumers want relevant ads but also need to feel secure online.

In the current ad tech space, this personalization is expected and even desired. Younger Millennials and Gen Zs grew up with social media influencers, internet personalization, and algorithms that predict which products they are most likely to be interested in. While they want authenticity, they actively want their media to reflect their personal preferences.

Big Fish in a Small Pond

However, according to Jamil Farshchi, the Chief Information Security Officer at Equifax, this desire for personalization has made Millennials and Gen Z the most susceptible to phishing. A study by Atlas VPN found that more than one in five (23%) of the Gen Z and Millennial generations have fallen victim to a phishing scam. Additionally, 19% of Gen Xers and 9% of Baby Boomers have been victims of phishing. 52% of Millennials and Gen Z have had a password stolen, or know someone who has, and just under half (48%) have had a social media account hacked.

Ruled by the Click…or Clickbait?

How do we disconnect the click from clickbait while gaining the benefits of personalization and consumer trust? The answer is linking exposure to ads with behaviors not related to clicks. The metrics we set define business outcomes, and being ruled by the click is an action that highly incentivizes a behavior that is not correlated with conversion. By looking for other performance metrics such as view-through conversions, we can create a safer and better consumer experience that changes the conversation from “I hate ads” to “let me show you this cool product.”

For more on being ruled by the click, see our first installment, “You Can’t Measure Display With a Yardstick or Clicks,” here. To understand how to integrate this measurement into your next campaign, reach out to your account manager or contact us.

This blog post is part of a series that highlights terms from our Ad Tech Glossary of Terms, a handy reference tool for reviewing terminology on your own. If you missed “The ABCDs of Ad Tech: Audience, Behavioral, Cookie, and Data,” you can read it here.

Download The advertiser’s guide to new brand metrics by Digiday and learn tactics for improving awareness and conversions.Get the Guide

Download The advertiser’s guide to new brand metrics by Digiday. Get the Guide