Steph Curry – debatably one of the best NBA players alive – had one of the best seasons ever and received his second consecutive MVP title. While we may be biased by living in the heart of Warriors nation, it’s hard to deny that Curry had an amazing season. With the Warriors’ epic comeback against the Oklahoma City Thunder, we used Quantcast data to look at how people in other states are searching for Curry. It turns out other states’ residents aren’t as obsessed with details of Curry’s new mansion, but still show an interest in his life both professionally and personally.
Compared to average U.S. online users, Steph Curry searchers tend to be male, 25–44 years old, with an income of $50–150K, college educated and ethnically diverse. Searchers were overrepresented by African Americans, Asians and Hispanics. Unsurprisingly, California made up the bulk of Curry searches while Georgia, Maryland and Delaware also indexed highly compared to their respective state populations.
Searches across the U.S. were focused around Curry’s remarkable 2016 season, his top-selling Under Armour shoes, photos and playoff/MVP news. Western and Midwestern states showed the most interest in the 2016 season while Southern states indexed toward his shoes. Northeastern states were interested in Curry’s past seasons and college career while California – home of the Warriors – indexed the highest with news about the playoffs and his MVP title, closely followed by details of his new Walnut Creek mansion. 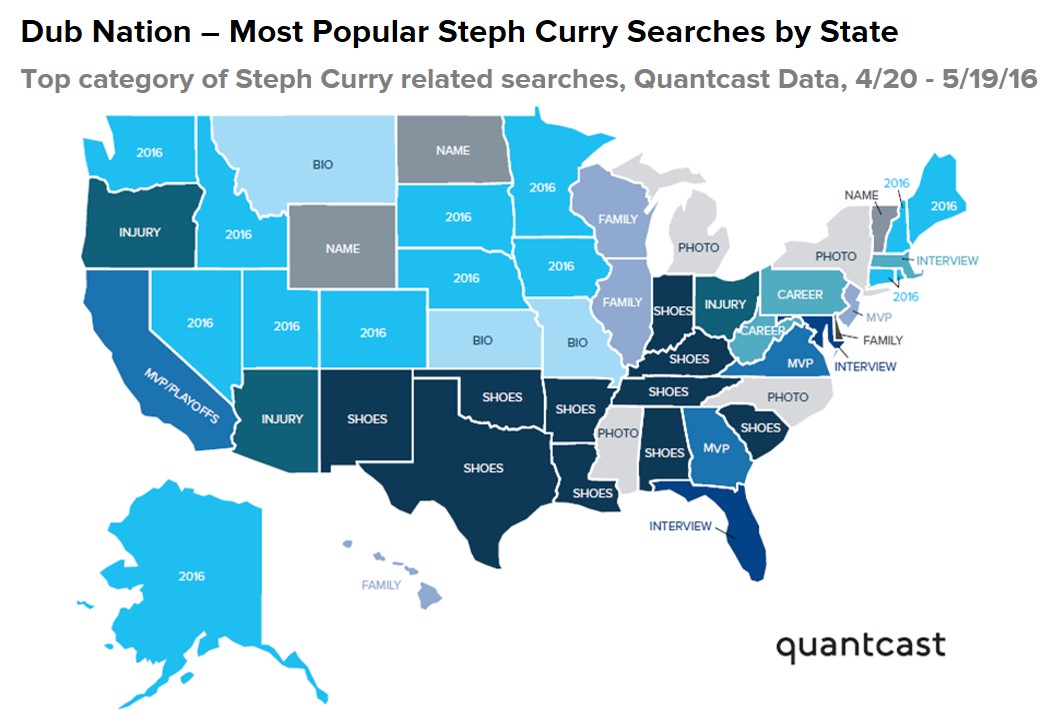 The following are the types of terms and phrases included in each of the search categories:

Whether it’s Curry’s 2016 season stats, photos or family-man appeal, it’s more than just his shoes that grabbed the nation’s attention. As for us, we’ll be rocking our blue and gold for the Warriors championship rematch with the Cleveland Cavaliers.
About Quantcast
Quantcast has one of the world’s most-sophisticated data-intelligence platforms, using big data and machine learning to solve the biggest challenges in marketing. Quantcast Measure is used by leading publishers for free audience measurement, including demographic and lifestyle insights powered by Quantcast Audience Grid. Quantcast Advertise is a leading programmatic advertising solution for reaching and influencing targeted audiences. Learn more at www.quantcast.com.