In what most would say was a surprise turn of events, the ‘Leave’ vote prevailed in the EU referendum, also known as ‘Brexit’. The UK is now facing political chaos and economic uncertainty. The result of the referendum has shocked the world, sent the pound (at least initially) into a downward spiral along with many of the the global financial markets. Leveraging Quantcast’s proprietary data, we took a look at the search behaviour amongst the British public immediately after the monumental vote and examined how the rest of the world reacted.
The UK had two distinct camps in the EU Referendum: The Remain party, those in favour of keeping the UK in the EU – typically a younger demographic residing heavily in cities – and the Leave party, those in favour of leaving the EU – an older skewed audience fed up with the politics of the EU and located in less urban areas. Characterising people that searched various forms of ‘Leave’ or ’Remain’ in conjunction with ‘Brexit’/’EU Referendum’ a month before the vote, we categorized the top search terms of the two groups the day following the vote.
Search terms within both groups were centered on immediate consequences of the vote. Compared to people in the Leave group, people in the Remain group showed higher interest in very specific concerns after the vote like job security and xenophobic related crimes. The Leave group searches were less issue concerned and more focused on understanding the meaning of the results. Top Leave searches were around general facts, politicians reactions and immigration – a hot button issue throughout the campaign

The rest of the world’s search terms were broader as people sought to understand the full scope of Brexit. The EU countries we examined – France, Germany and Italy – over indexed heavily on the impact of Brexit on other EU countries, as well as immigration, as the UK leaving the EU would bring potential restrictions in free movement and trade between the countries.
Countries not tied to the EU searched categories that gave a broader understanding of the issue. For example, Australia’s search behaviour over-indexed for arguments for Remain/Leave, general news and the odds/polls of the vote. The USA’s search terms compared to other countries skewed more toward opinions of the vote from celebrities and other politicians, along with a specific interest in the news of MP (and pro-Remainer) Jo Cox’s murder. 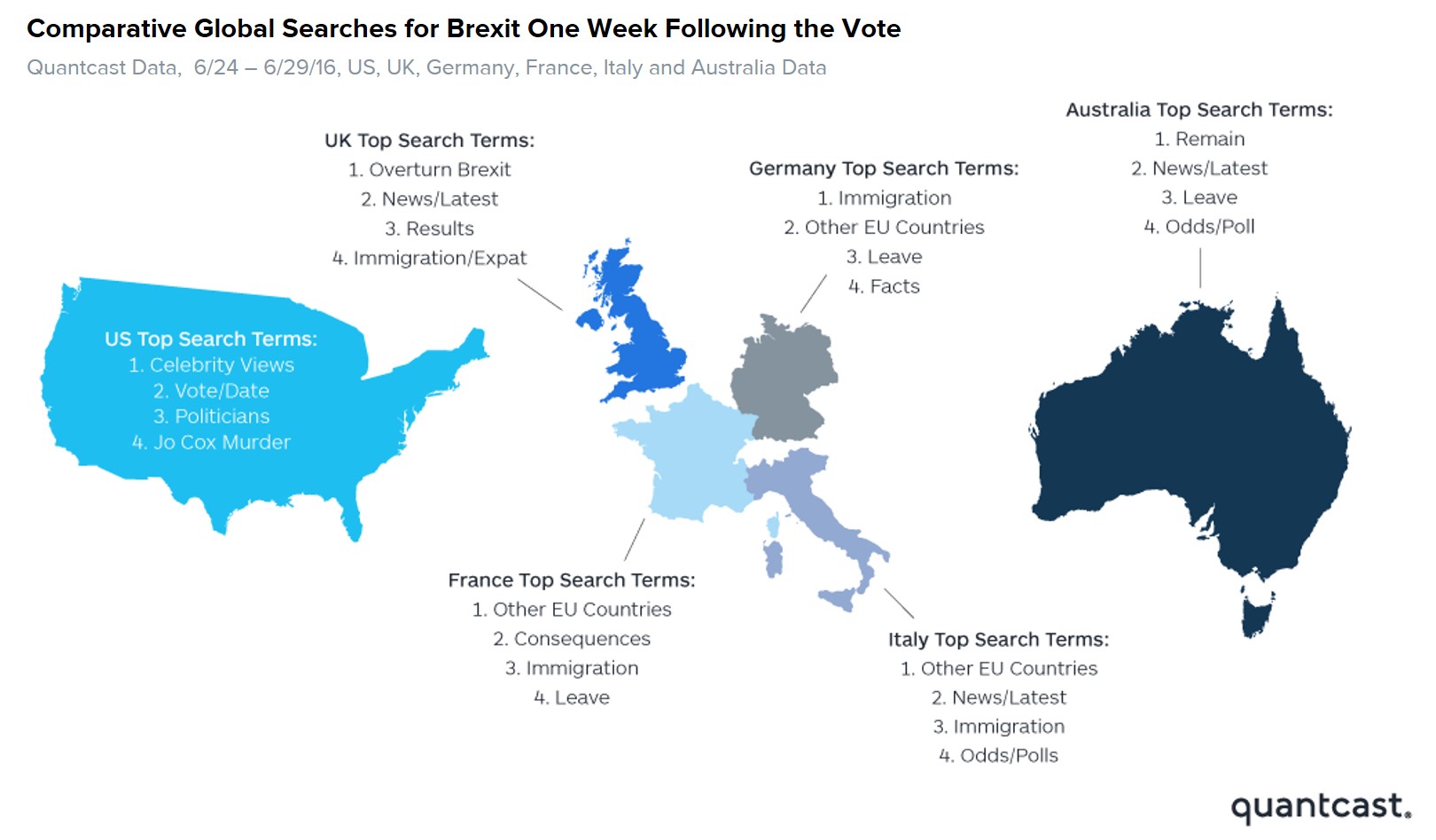 Although bookmakers had odds of 11-4 in Remain’s favour three days before the referendum, the tide quickly shifted. Speculation of the surprise results point to a stronger Leave message and complacency within the Remainer voter base.
Search Terms included:
UK Leave/Remain Data:

About Quantcast
Quantcast has one of the world’s most sophisticated data-intelligence platforms, using big data and machine learning to solve the biggest challenges in marketing. Quantcast Measure is used by leading publishers for free audience measurement, including demographic and interest insights. Quantcast Advertise is a leading programmatic advertising solution for reaching and influencing targeted audiences. Learn more at www.quantcast.com.